On Tuesday night - I lost my third Granddad.  I was fortunate to grow up with a full suite of Grandparents all of whom lived to a ripe old age, so to inherit another one was one of those rare bonuses that life throws your way.

I suspect I knew Sam for something like 35 years starting from early visits to Dagenham Chase when I was under the wing of Ken Barrett and then through my fervent 1990s birding scene when I was also asked to become art editor for the Essex Bird Watching Society.  Sam, like me, was one of the artistic contributors and I remember asking him for specific pieces to put into the publications.

In 1997 we ventured to the Isles of Scilly in the October where the combination of Sam, Jim Smith and Barry Hough made for an enlightening week away, with a Yellowthroat fresh in from America to spice things up and a return twelve years later with the ‘lads’ was no less exciting. 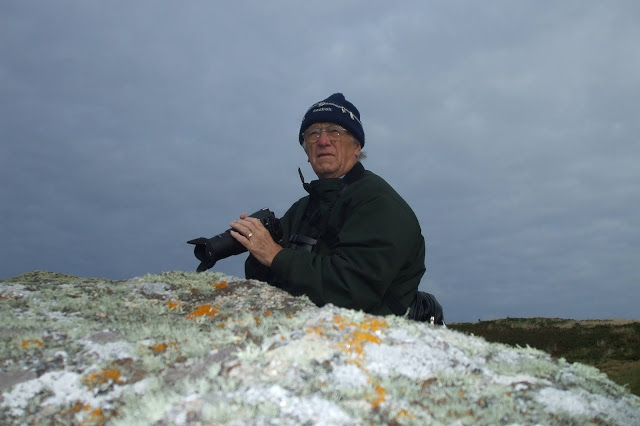 In July 2000 the RSPB bought Rainham Marshes from the MoD and I was asked to find ten birding volunteers to assist with surveying the site which of course also gave us access to the fabled east end where we had never set foot before.  Sam had birded the area since 1955 if memory serves and was an obvious choice.

He also offered to help with guided walks and we managed to fit in a few each year that slowly became a weekly fixture even before the doors officially opened in November 2006. These sporadic ventures morphed into the Wednesday Walk and twenty years later Sam was still with us and had become my indispensable ‘second’ on my regular tour around the trails with the public.

To be fair in the last five years of so it became Sam’s walk rather than mine as my job kept me inside more but his ability to engage and enthuse with the public made him a winner with the punters many of whom would go onto be firm friends.

We had some great times on those walks together and found some wondrous birds over the years but probably none more so than the White-tailed Plover in July 2010. ‘Have a look in my scope’ he said knowing full well what he had found. I glanced, swore and picked Sam up off the ground in a massive ‘thank you’ bear hug that he would always tell people about thereafter.

In 2005 I began taking some of the Rainham regulars with me on trips further afield.  Our group became known as the Boozy Birders and once again Sam was my constant companion – not a second – but an equal to share the delightful task of enlightening others to the natural wonders around us.

We stood together on cliff tops engulfed in the fishy odour of a hundred thousand seabirds, watched fishball flocks of Knots twirl and whirl across a pink painted Wash at dawn, stalked Bluetails in the gloom of a Norfolk wood, froze on the Harty Watchpoint as raptors and owls floated by and similarly at Stubbs Mill with bugling Cranes and wild geese across a winter sky, stumbled on more punky crested Hoopoes than any tour group ever should, endured howling squalls to seawatch for hours and listened to the last Golden Orioles whistling from the poplars while Bitterns boomed. We stood on heathland after dark battling mossies and hoping the Nightjars would wake up and eat them all, savoured a Nags Head dawn chorus of Pied Flycatchers, Redstarts and Wood Warblers and watched the steady rise and return of the Red Kite, making trips to the Chilterns just to see them whereas now they breed so close to home. We endured a white out at Dingle as we crunched through the snow covered shingle for Buntings and Larks, followed winter Waxwings around Kentish supermarkets and nearly drowned on a particularly wet January day chasing rare geese around the Buckenham Marshes.

It was never just about the birds and there were trips to the hot Surrey Heaths just to look for dragonflies or summer woodlands to wait for Purple Emperors to descend and beat their wings in annoyance in your face. Downland butterflies were followed through hazy flower meadows, huge Raft Spiders were watched stalking Damselflies and Bee Wolfs were studied as they despatched their Honey Bee prey.

Lunchtime was an important fixture of any day out and a convivial picnic atmosphere was always present although only very rarely was there actually any booze! We would find a spot and spread out and enjoy a leisurely repast. At Dungeness we always sat outside and did so, on the benches in the snow one winter’s day while I am still trying to forget the Oare Marshes visit when a front garden may have been commandeered despite my protestations.

And through all this Sam was always a focus of attention. He did not like a fuss being made but it was impossible not to be drawn to him. He had stories to tell and I sincerely regret not sitting down with him and writing them down as promised. He would tell of his days ringing at Romford Sewage Works when Tree Sparrows were so common you just let them go and Red-backed Shrikes nested in the local hedgerows. Listening to Sam always made it all the clearer what we have lost in the last few decades from this country’s avifauna. I can notice the changes during my nearly fifty years but Sam had a further 35 years of memories to call upon. We listened in wonder at a different era of birding.

I remember his tale of a poorly Pelican at Canvey that they picked up and even earlier, a species of Darter sitting on the beach there that waddled back into the Thames and swam away with just its serpentine neck and dagger bill showing. Sam was disappointed that he could not find his original 1955 notes from that day for a species that is not even on the British list! But the big one in his head that got away was a little brown bird up on the silt lagoons at Rainham one October in the 1960s that flashed a blue tail as it dashed away. Back then it would have been unthinkable to find a Red-flanked Bluetail in the UK but now they are an expected autumn waif although Essex still hasn’t been graced by one and it seems likely that Sam did indeed have a county first all those years ago. Infact when he saw the one in Norfolk in 2015 he turned and said to me, ‘yep, that’s what I had...’ with a big knowing smile.

Sam would come to Lesvos with us whenever he had the chance and he quickly fell in love with this beautiful Greek island, its wildlife and the people that make it such a special place.  It was just the right balance between a good day’s birding and sipping a cold beer that appealed to his laid back character.

The last eight months have been troubling and trying times for all of us but Sam’s spirit never wavered and when it became possible once again to get out and about we were able to appropriately meet up and explore some of the local Kentish summer countryside and share magical butterfly, orchid and dragonfly encounters along with a host of other insect and plant life.  Those last few days out will always remain very special to me.

I knew that losing Sam would hurt but it is actually more difficult that I could ever have imagined. He was there, we spoke and then he was gone just a few days later. There was no chance to say goodbye.

I will celebrate his long life and his guidance and friendship and all that this gentlest of souls was able to share with me and those around him.

Sam loved his birds, his Spitfires and his painting and there will always be an ornithological moment to trigger a memory, the chance of a guttural Merlin engine roaring overhead to make me look up and smile and his wonderful artwork forever on my wall. 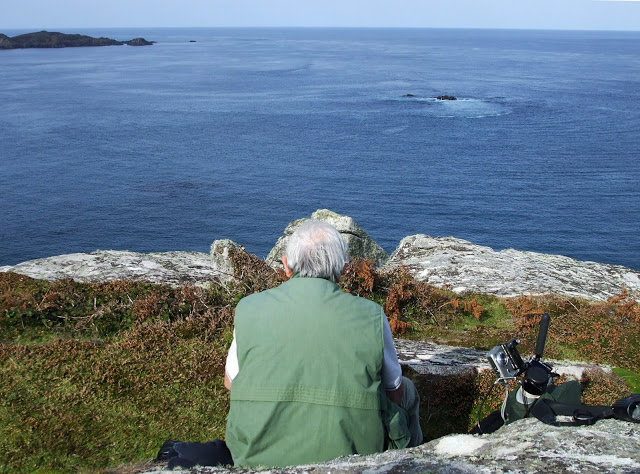 For the yearly joint Winter Birding Day event with local wildlife tour company Swallow Birding it was great to see so many people come out despite a far from favourable weather forecast for the day, and join the two guided walks with tour leader Steve Grimwade around the nature reserve.

The visitor centre was buzzing with people and by the end of the day, there were just a few crumbs of cake left in the catering area with the Cherry and Almond Scones, freshly baked that morning being a particular favourite.

Thanks to the staff and volunteers and all those who visited, for making the day a great success. We look forward to repeating the day again next year.

We are currently looking for short papers on Essex birds for the 2016 and 2017 Essex Bird Reports. The paper can be on identification, a particular site or indeed anything bird related provided that Essex is involved. For examples of previous papers, please see old Reports. If anyone thinks they have something suitable please contact Simon Wood through the following email essexbirdwatchingsociety@gmail.com

Read more about how we use them and our privacy notice by clicking "More Information".

By continuing to use this site you consent to our use of cookies.